Numerous, widely propagating, natural slab avalanches occurring during or shortly after the 2/16-18 storm. Avalanches generally failed within storm snow, and wider and deeper, on the 2/5 CNY crust. 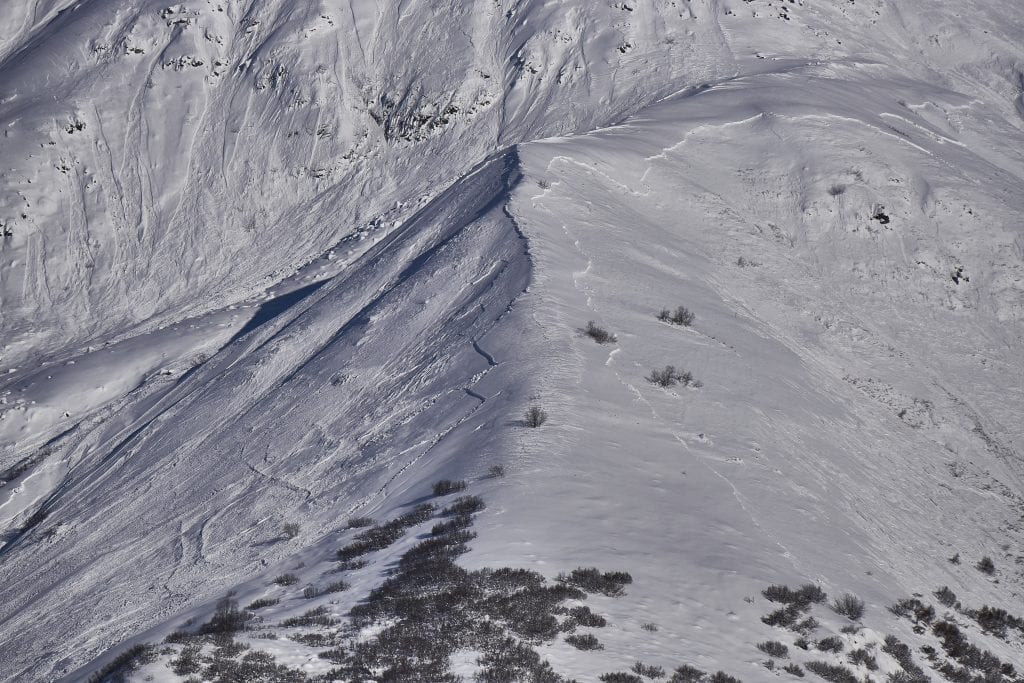 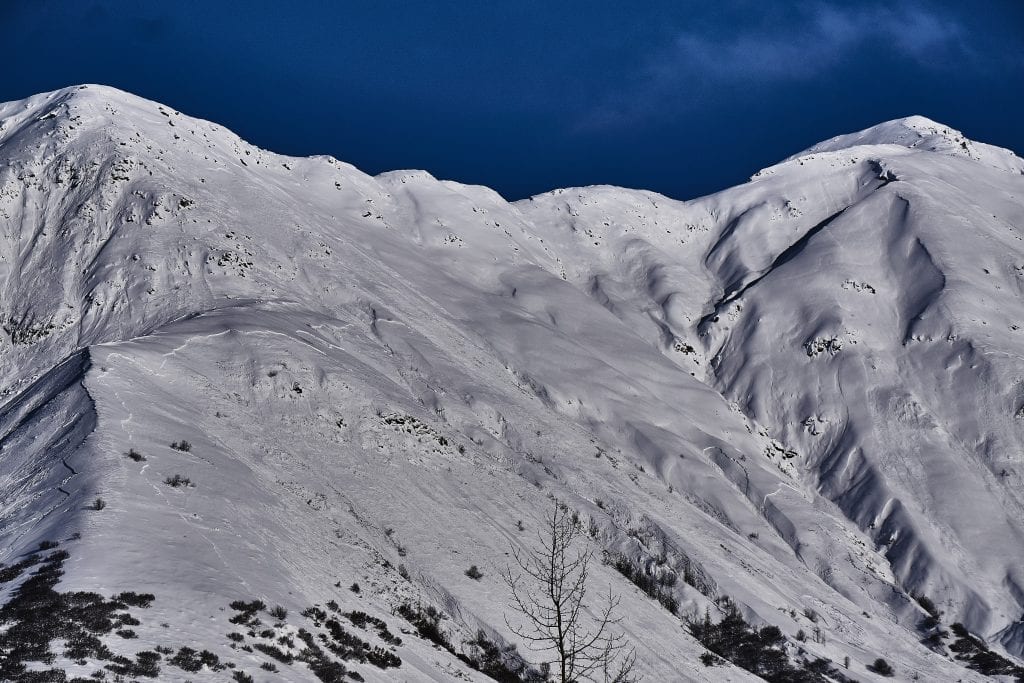 Above: Same as previous picture, notice propagation up to skyline ridge and other avalanches to the right mid-slope. 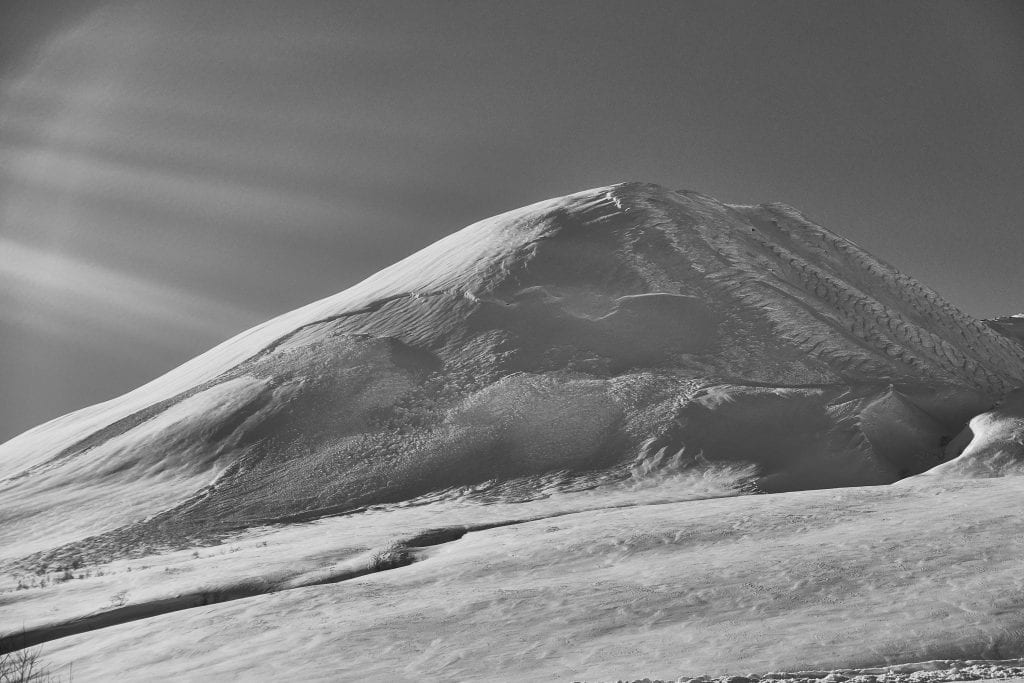 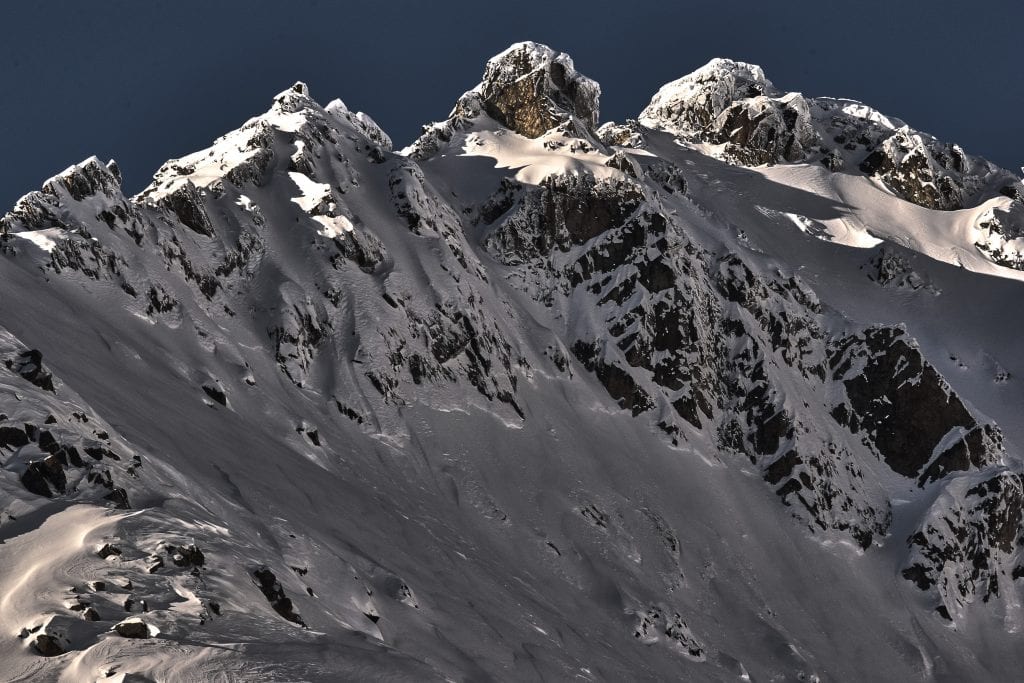 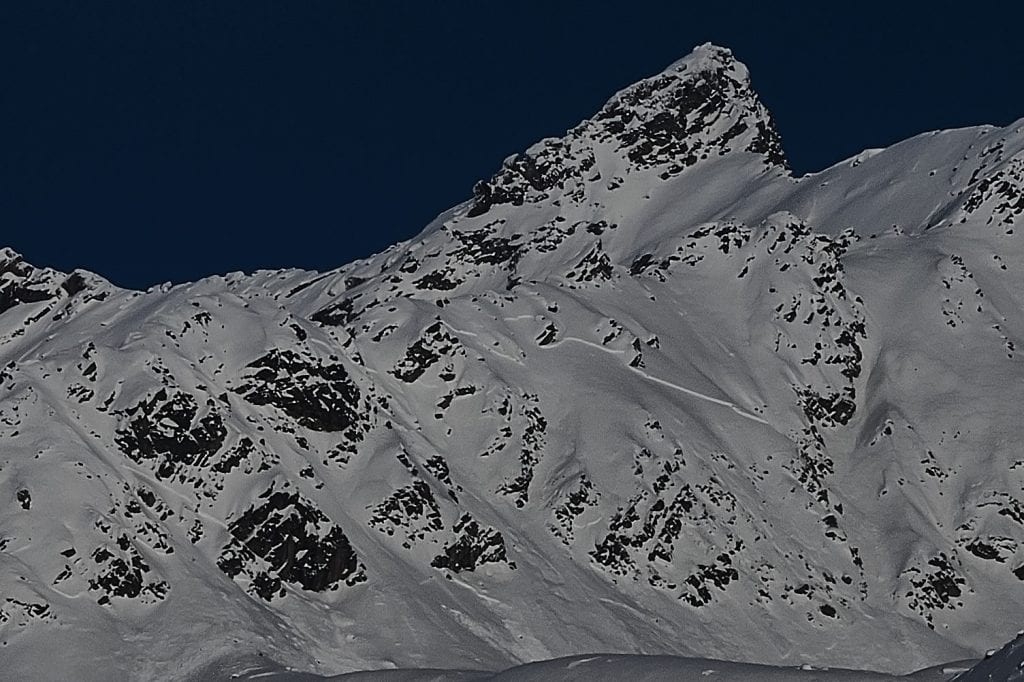 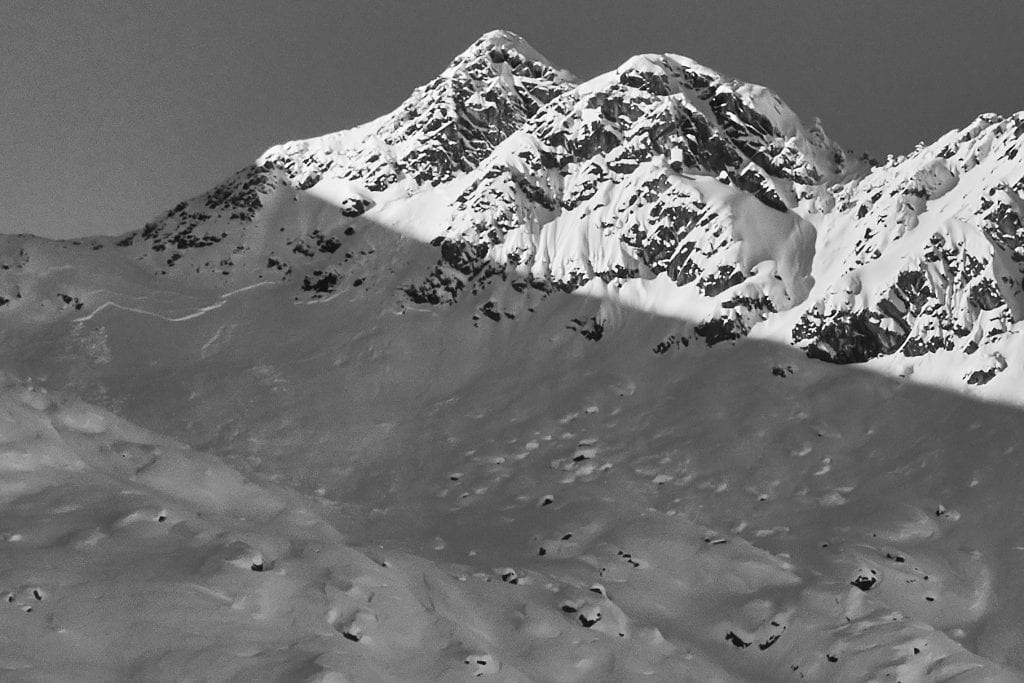 Above: High Grade, E>SE, 4550′. Notice storm interface failure of thin crowns above the deeper failure on the CNY crust. The thinner storm snow failure may have stepped down, triggering the deeper persistent, CNY weak layer. 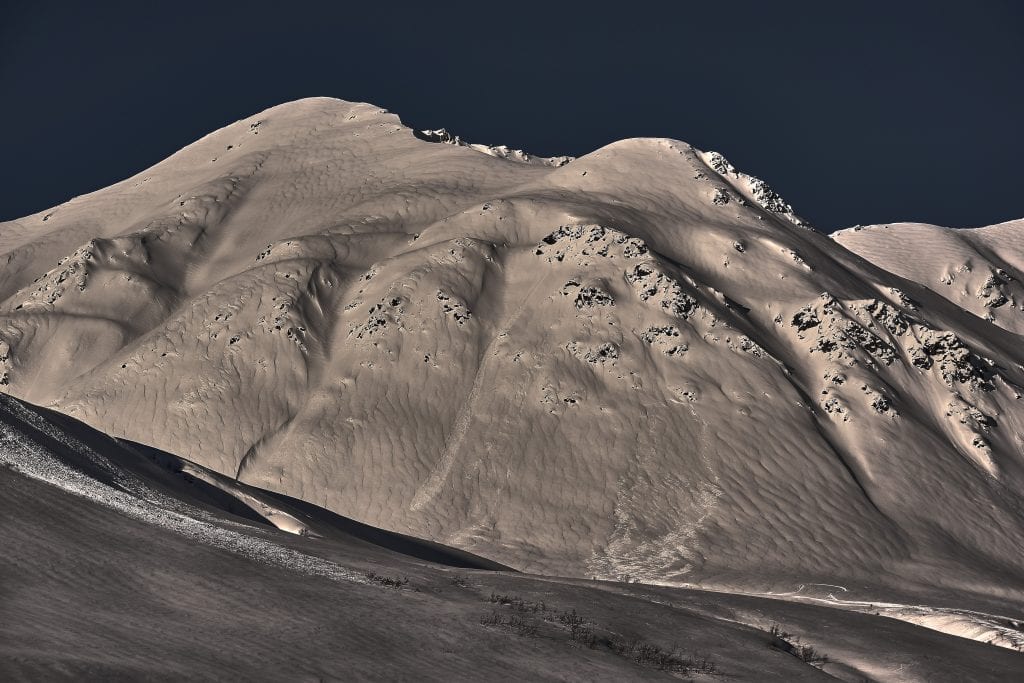 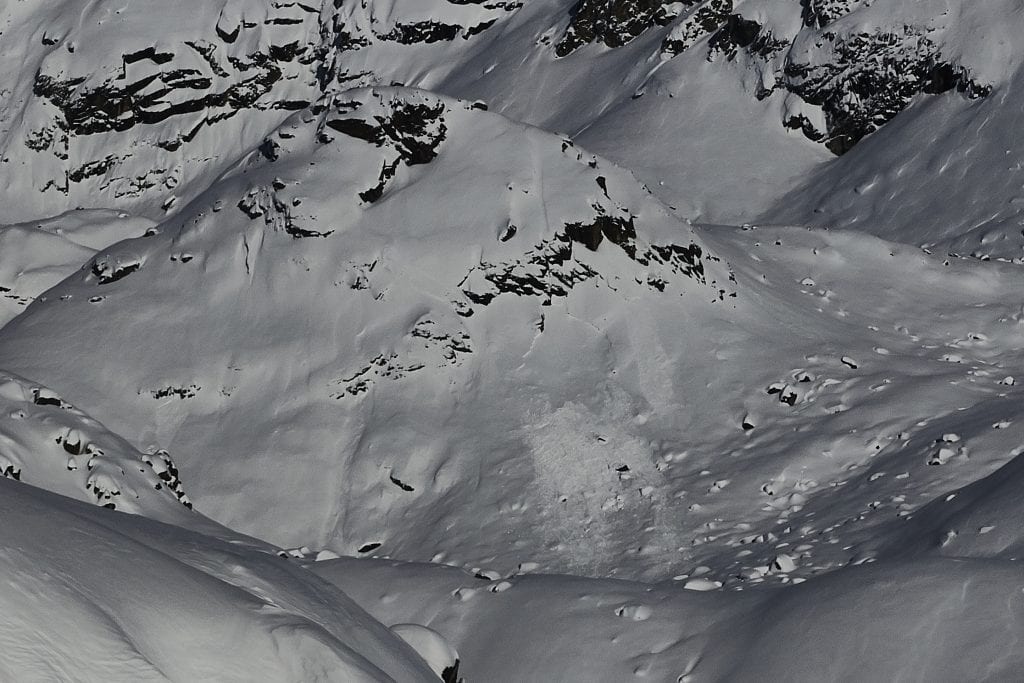 Above: Pinnacle Area, Rock Garden, SW, 4200′, failed during the storm.

Avalanche hazard exists for persistent slab at all elevations. Careful snowpack evaluation, cautious route-finding and conservative decision-making are essential. Widespread natural avalanches occurred during the storm last weekend.The last reported human triggered avalanche was on Tuesday this week, when a snowmachiner remote triggered a large avalanche from the flats near Dogsled Pass.

Slab avalanches are the main concern, 2 feet deep at low elevations, and 3+ feet deep at mid to upper elevations. Avalanches could be large enough to bury, injure, or kill a person.

Avalanches may be remotely triggered from the flats below, or from adjacent or connected terrain, and may run long distances.

Large avalanche near Dogsled Pass remote-triggered from the flats by a snowmachiner on Tuesday. No one was caught.  Thanks Justin Pleier for sharing this information!

Storms starting last weekend have brought 35″ of low density new snow (2.5″ SWE)  to Hatcher Pass.  With plenty of seductive powder and fair weather on tap starting Friday, this is a perfect recipe for human triggered avalanches.  Superb skiing and riding quality abounds, but there is limited information about how the snow will react to a trigger like a skier or snowmachine in steep terrain.  At this time, it is best to approach the mountains with caution, and give the snowpack time to adjust to the new load.

Avoid steep slopes of any size with terrain traps such as gullies or cliffs, and choose slopes with gentle, fanning run-outs. It’s best to play on low angle terrain until the snowpack has time to adjust to the new load.

This report is a mid-week conditions update, so please be sure to check hpavalanche.org for advisories on Saturdays and follow the HPAC Facebook for updates. Help us keep tabs on the Hatcher Pass area! If you see any avalanche activity send us an observation HERE. Thank you to everyone who has already submitted observations this season – you can see those HERE!