There is 30cm of new snow that skied well on top of older, stiffer snow. The highest rain crust is down 70cm (probably from Dec 7th). Below there are multiple layers with crust-facet combos and at the bottom is 20cm of 2-3mm basel facets. 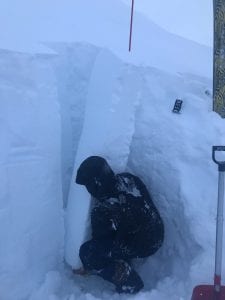 Strength and propagation tests alarmed us and we retreated to the car. CT Very Easy (on isolation) Sudden Collapse, 170cm down on the basel facets….TWICE.

ECTN, also twice – however….. no results other than surface slough (Dry Loose).

This layer in not developed enough to be called Depth Hoar and I believe it is rounding (becoming stronger) instead of growing into larger facets (Depth Hoar). We all need to watch this layer and be aware that it could release everything above it!