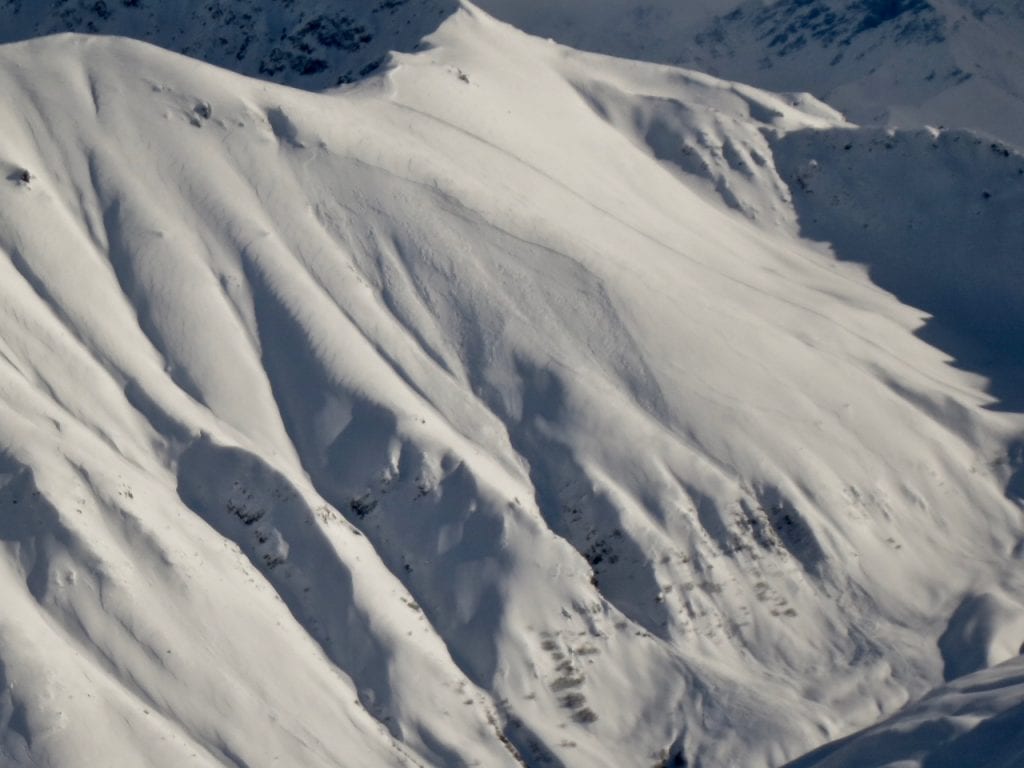 Above: 2 larger (D1.5 to D2) slab avalanches, 3500′, estimated 6-12″ deep on NW aspect of Arkose (Punk Spines, due N of Stairstep), one of which looked to have sympathetically triggered another small slab avalanche below. 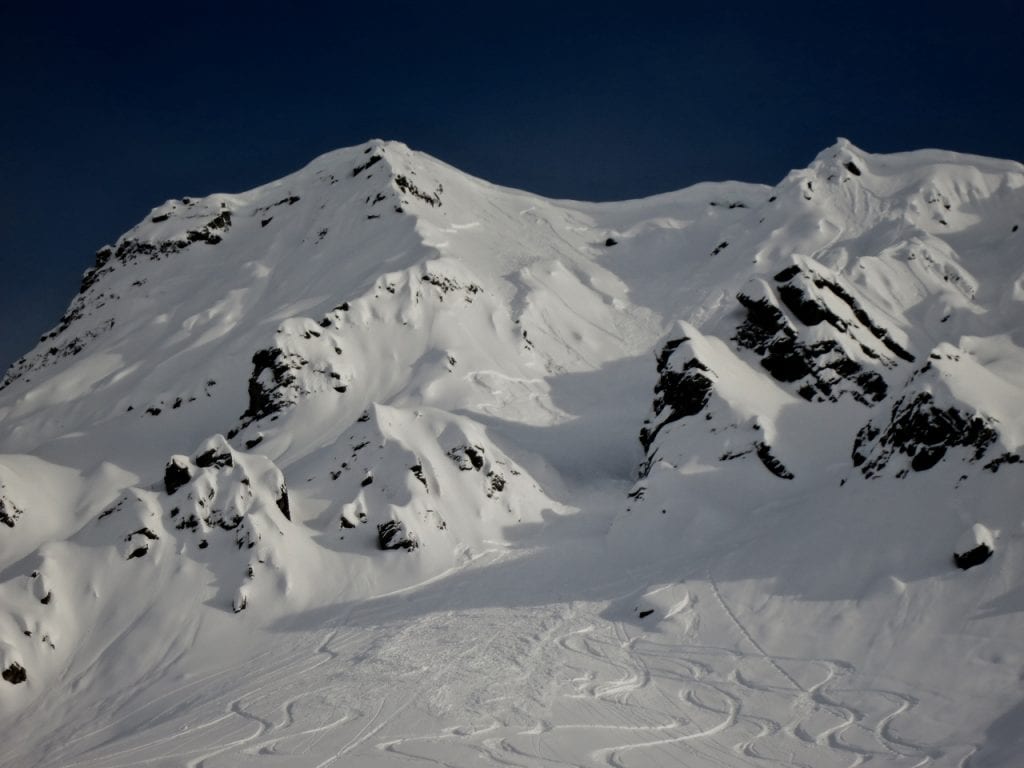 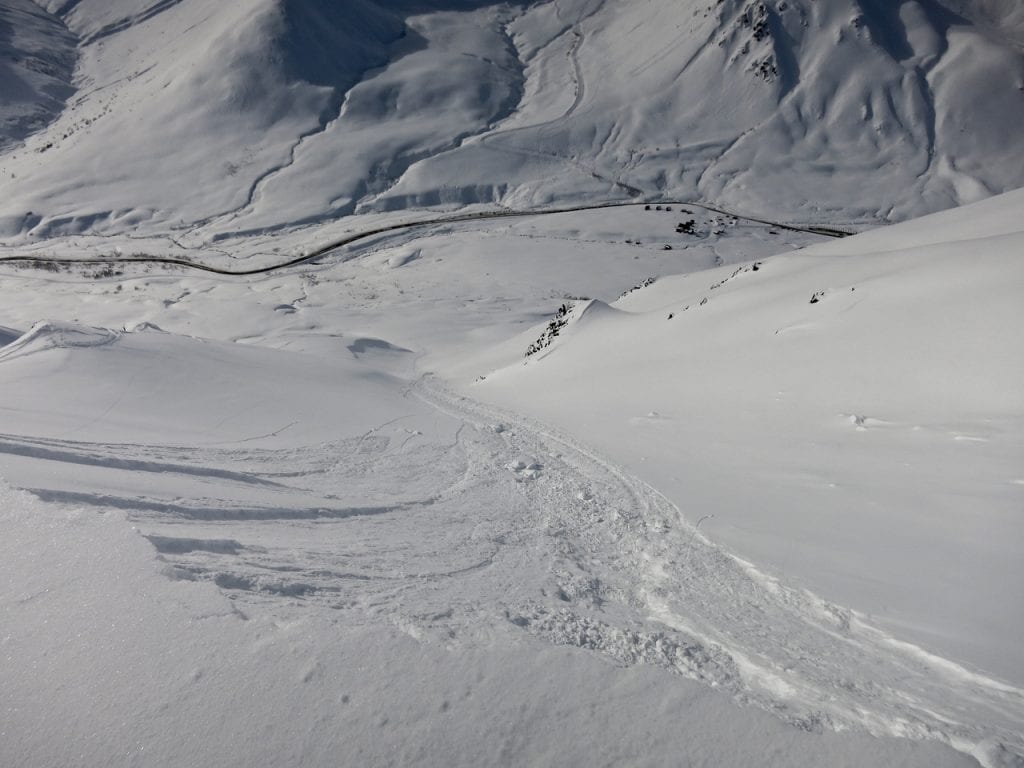 Above: Cornice-triggered loose dry avalanche on SW aspect of Marmot at 4300′. 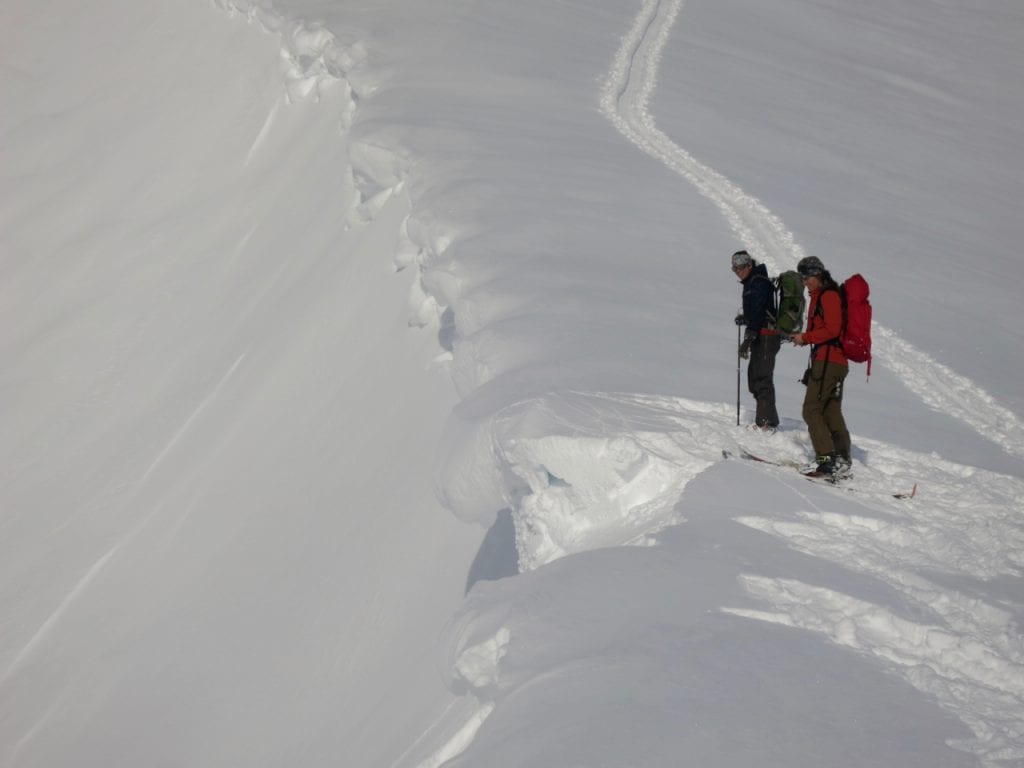 Above: Cornices have grown quite large along Marmot ridgeline and were sensitive to trigger on March 12.  This cornice was easily triggered resulting in a long running loose dry avalanche on the SW aspect of Marmot at 4300′. 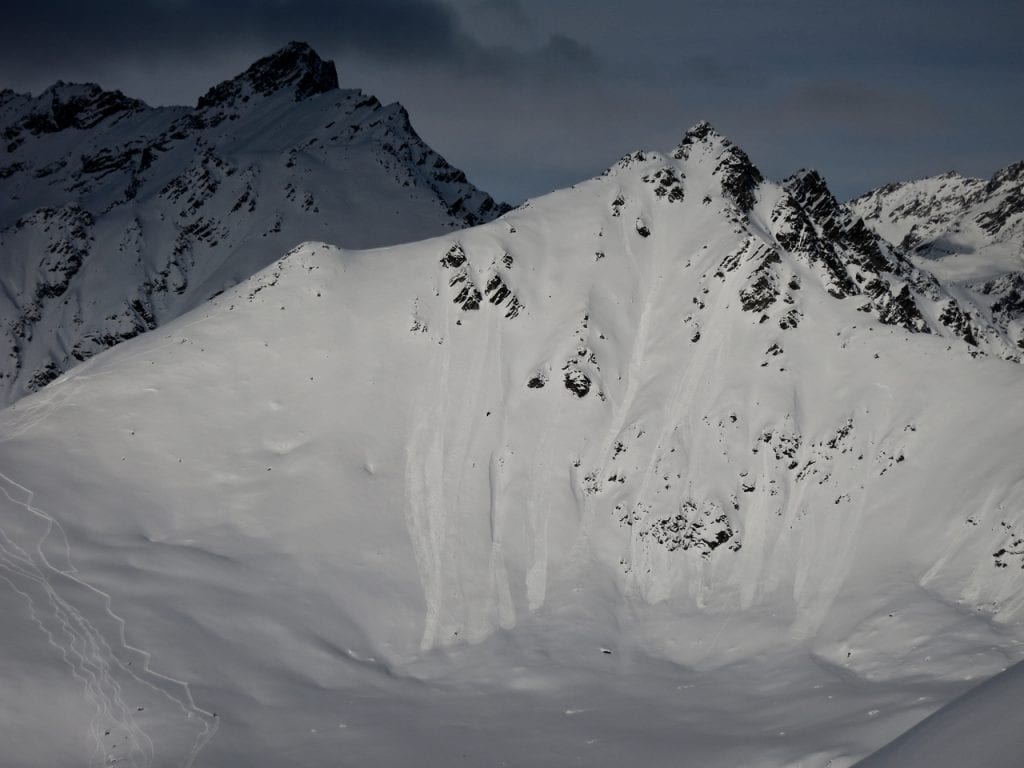 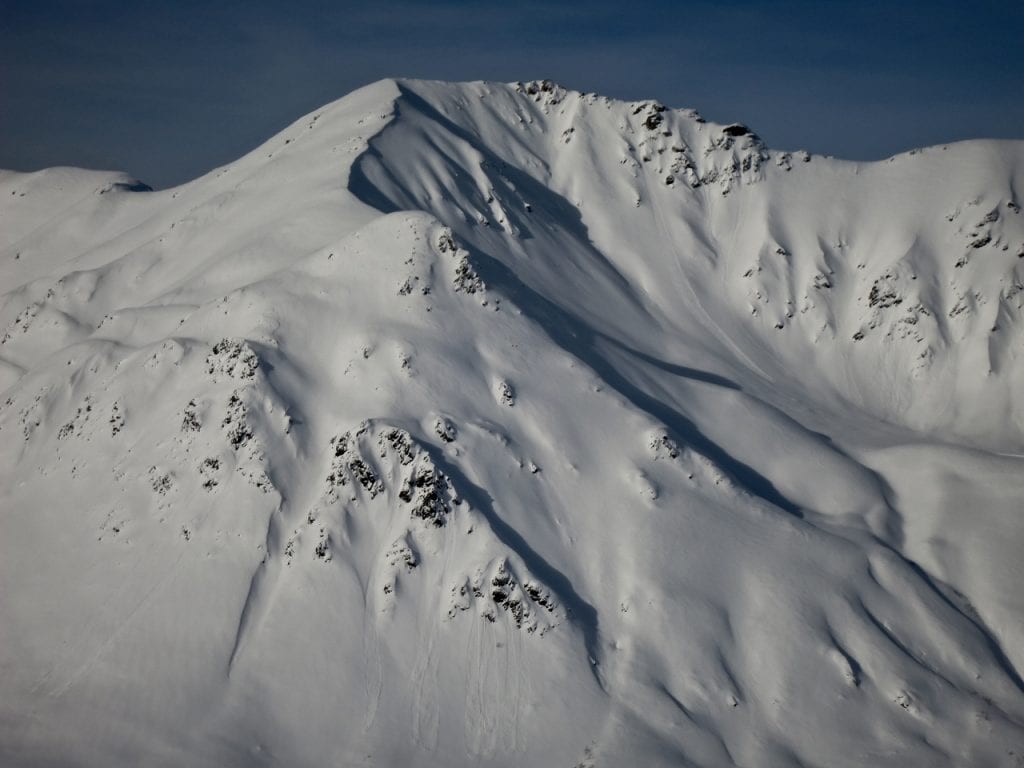 Above: Long running loose dry avalanche on NE/E aspect of Skyscraper, 4500′, that ran from ridge into Eldorado Bowl about 700 ft. 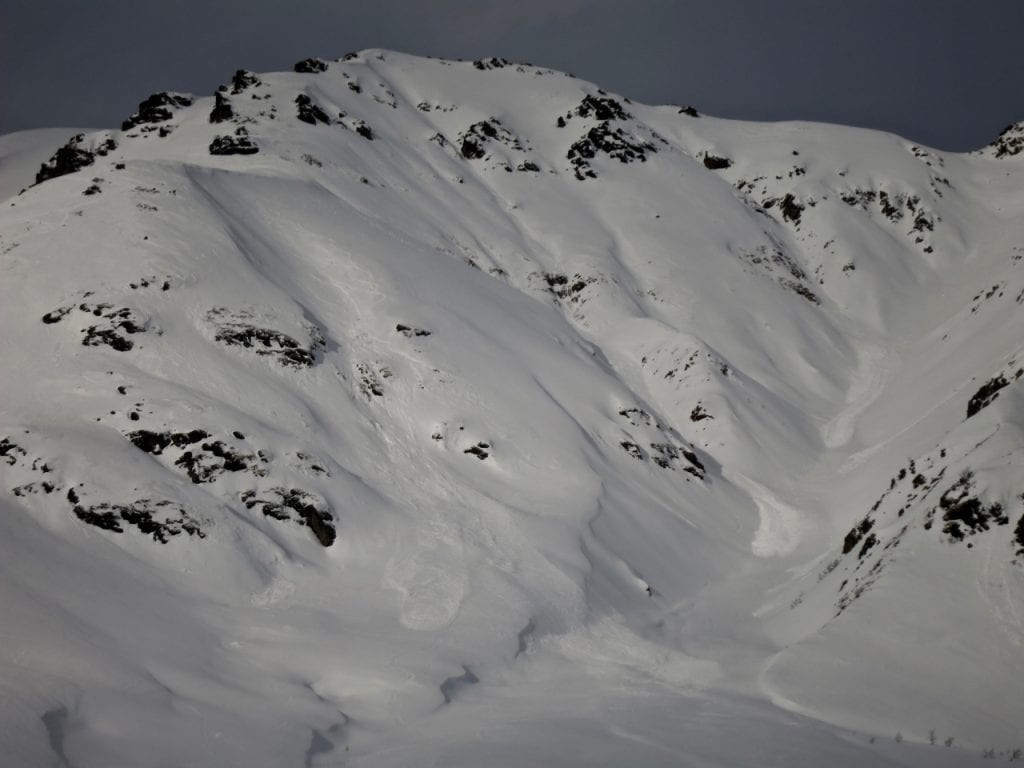 Above: Natural wind slab avalanches in NE aspect of cross-loaded Martin Mine Gully at 4000′ that is believed to have occurred overnight on March 8 during the wind event. 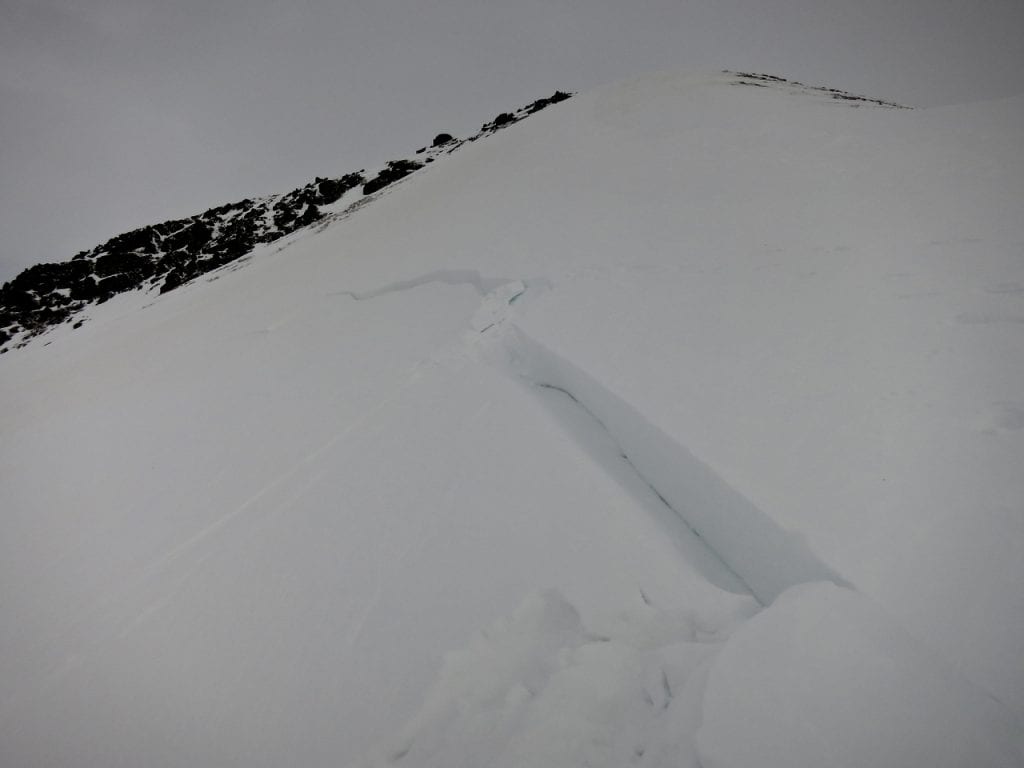 Above:Wind slab in W side of Hatcher Pass at 3900′ reported on March 9 during wind event. 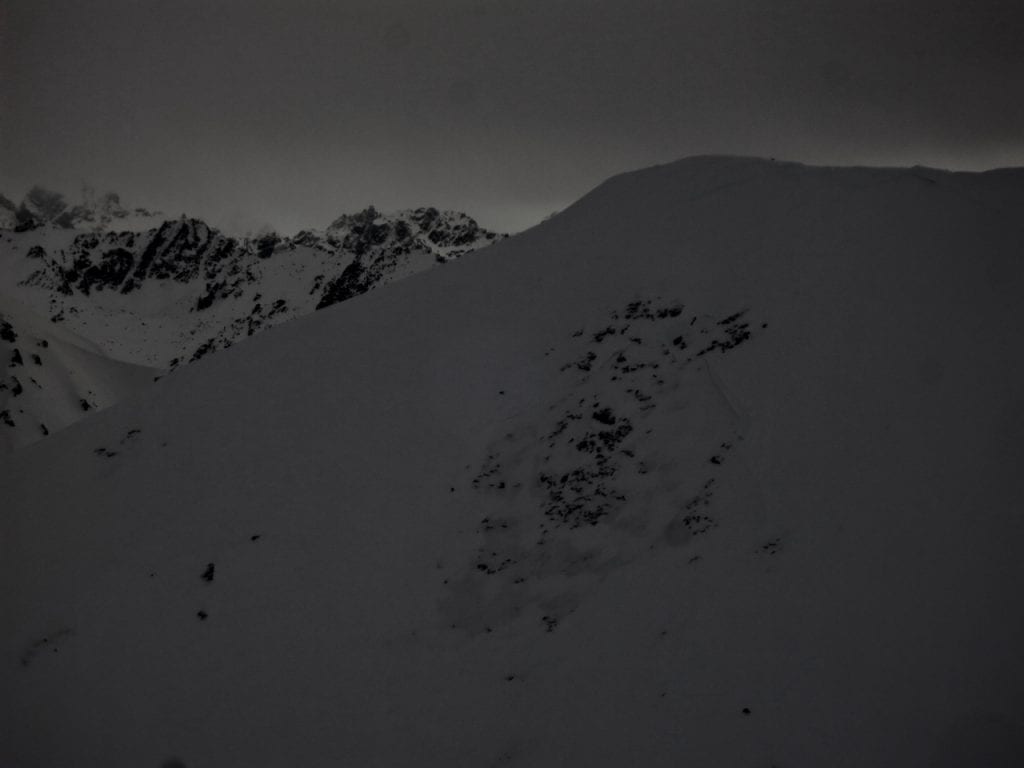 Above: Natural wind slab that stepped down into buried persistent weak layers and failed at the ground in April Bowl at 4500′ on W aspect.  Reported on March 10 during the wind event. This path is a repeat offender and has avalanched many times this season.

There has been 13″ new snow recorded at Independence Mine since 3/9.

This information is a Conditions Update. Danger ratings are only issued with avalanches advisories.  The next avalanche advisory is scheduled for Saturday March 16, 2019.

Moderate to strong E to ESE winds yesterday afternoon and overnight have picked up 6-9″ of low density snow that fell Monday March 11th and transported it to leeward aspects forming fresh wind slabs 6″ to 16″ thick. Human-triggered wind slab avalanches will be likely and natural avalanches will be possible in leeward and cross-loaded terrain, on predominantly W to N aspects, in mid and upper elevations. It may be possible, but is generally unlikely, for a wind slab avalanche to step down to buried persistent weak layers, triggering an avalanche up to 2′ thick at mid and upper elevations. Human-triggered avalanches will be unlikely at lower elevations. Careful snowpack evaluation, cautious route-finding, and conservative decision-making will be essential while we give the snowpack time to adjust to the new load.

Hatcher Pass received 4″ new snow (0.24″ SWE) over the weekend, another 9″ snow (0.6″) SWE Monday March 11th, and trace snow Tuesday March 12th overnight. The 4″ of snow falling over the weekend fell during moderate to strong winds.  The 9″ of low-density snow that fell Monday March 11th blanketed the landscape nicely, falling under light gusting to moderate winds. This low density snow has since been redistributed across Hatcher Pass due to E to ESE moderate to strong winds overnight.