Strong winds on 3/3 have built windslabs on lee aspects up to 1 foot in depth, deeper in spots that received the strongest winds.  These wind slabs have been deposited on a snowpack with poor structure created by the February drought/cold.  Near surface facets have been observed underneath new windslabs, this may keep this layer reactive longer than what is typical.  This setup is less prominent as you move towards the coast.

As you move farther from the coast the chances increase for shallower wind slabs to step down to deeper persistent layers.

Photo of flagging ridge tops from 3/3 that indicates windslab development on lee aspects.

Februarys’ cold and dry weather caused faceting to occur in our snowpack.  There is a lot variability in our forecast area, but generally as you move north, poorer structure exists.  With the return of precipitation and wind redistribution in late February/early March, near surface facets in the upper snowpack are being tested.  The most likely areas to affect deeper persistent slab avalanches will be in the Continental zone in rocky terrain where a thinner/more faceted snowpack exists.  Careful snowpack assessment is necessary while traveling in the Continental zone. 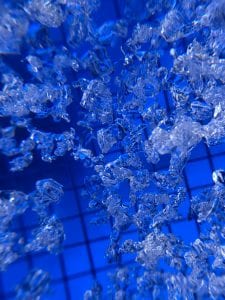 As the days move past and the sun gets higher and higher on the horizon so does the potential for wet loose avalanches on solar aspects during the heat of the day.  SE-SW aspects are beginning to undergo changes from their midwinter state.  Warm temperatures during the heat of the day will penetrate into the snowpack. and cause surface stability to go down.  The amount of heat penetration in the snowpack will determine the amount of wet loose activity that occurs.  Slopes will be most prone when the sun is directly perpendicular to them.  Once  temperatures cool in the evening slopes will rapidly regain strength in the form of a crust.  Avoid steep solar aspects that are becoming moist during the heat of the day.

3/4- A human triggered avalanche was reported on Billy Mitchell while a group was bootpacking.  NW aspect/ ~4500’/ Crown depth was 3′  and wrapped around a corner of terrain for another ~300′.  No one was caught, hikers were able to run off of the slab. 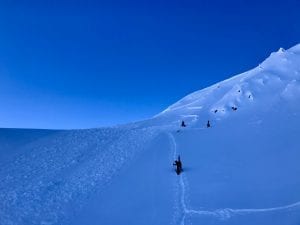 3/3- Observed an avalanche in The Books, that I’m assuming was skier triggered. NW aspect/~5500’/ran ~800′ vertical.  Crown looked less than a foot deep but included nearly the entire start zone. No other details available. 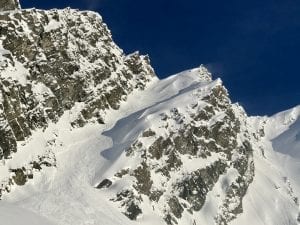 2/28- 2 skier triggered D1’s in the Approach Couloir of Billy Mitchell.  ~3800′, NE aspect, ~80′ wide, ~8″ deep and ran 300′ vertical.  Remote trigger also occurred at the bottom of the couloir in mellower terrain pulling out a smaller, but deeper pocket in adjacent rocky terrain, ~20″ deep.

2/25- Spring arrived on 2/25 with numerous point release wet loose on SE-SW aspects at all elevations and in all forecast zones.  Point releases caused some small storm slabs to pull out in some locations as well. 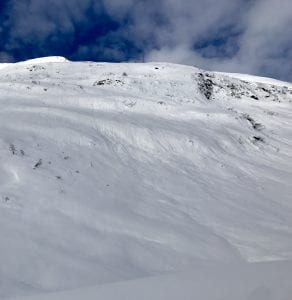 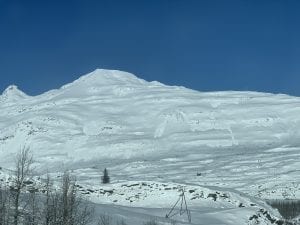 2/17- A D 2 natural was observed off steep north facing terrain on Benzene peak that ran 800′. Several small natural D1’s were observed in Benzene Alley on convex terrain features.  These all ran on the 2/1 wind board. 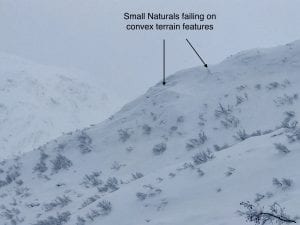 2/13- No natural or human triggered avalanches have been observed or reported since 2/1.  Thompson Pass has received only 1 inch of SWE in the last 3 weeks.

2/1- Natural avalanches from the 2/1 outflow event were noted on Hippie Ridge in cross loaded gullies SW aspect/ D2’s ~4000’/ depths were difficult to gauge because crown were rapidly being filled in by wind deposit. 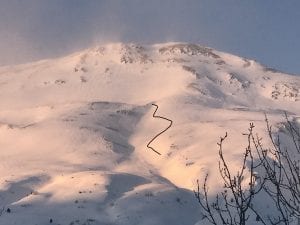 As stated above depths were difficult to gauge due to wind refill.  A report did come in of  3′ crowns on the west aspects of the Mt. Dimond moraines/ ~4000’/ ~300′ wide

Many other avalanches likely occurred but observation was limited due to wind refilling crowns.

1/27- The photo below shows a natural  D3 avalanche that was reported on 1/30. It is uncertain when this avalanche occurred. It most likely happened during the 1/26 wind event.  40.5 Mile Peak/ NW aspect/ full depth, 3+ meters / ~800′ wide/6000′.  Demonstrates that basal facets are still a player in our continental zone. 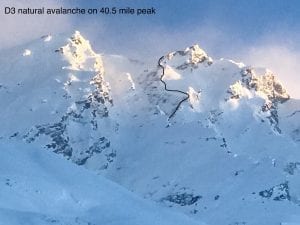 Schoolbus had a natural avalanche affect the highway early 1/19 that covered the road with 2′ of debris for ~100′.

The most notable slide occurred at Ptarmigan Drop and Python and deposited 6′ of snow on the highway for 150′ of road length.  Crowns failed at ~3500′ and were extensive, connecting almost the entirety of the Nicks’ through Python Buttresses.  The western extent of Nicks stepped down to the ground in an area that failed full depth 12/1. Nearly a mile of terrain was effected with some crowns approaching a quarter mile in length. 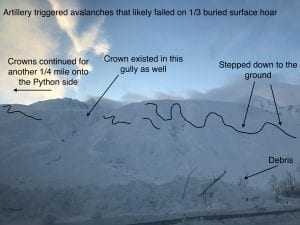 It is unclear how much of the activity at Three Pigs and 40.5 Mile was natural versus artillery triggered, but there were multiple paths leaving debris at the bottom of run outs. 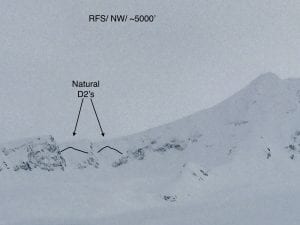 1/9-  Natural avalanche observed on an east aspect of North Tiekel.  Likely failed during warmup the night of 1/8.  Avalanches failed at terrain convexities around 3500′.  This area is 4 miles north (beyond) our Continental forecast zone, but is still indicative of that zone. 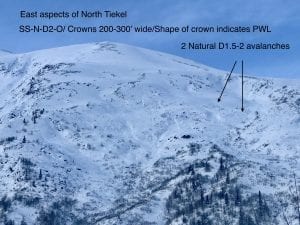 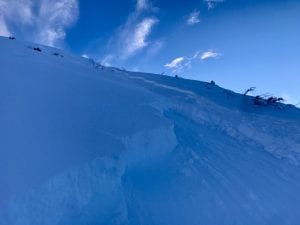 12/24- Observers reported remote triggered avalanches up to 100 meters away that were a meter deep.  Tsaina trees below 3000′. 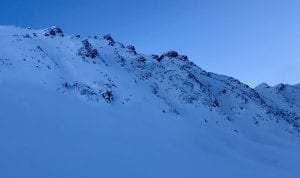 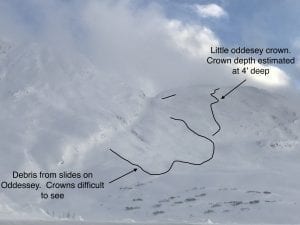 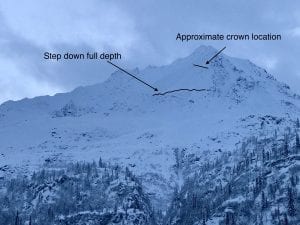 -Natural D2 avalanche activity was also noted on west aspects of 40.5 mile and Iguana Backs ~3500′.  Further observations were prevented due to poor light.

12/20- A powder cloud reached the highway at the mp 42 slide path. “Three Pigs”.  No other details available 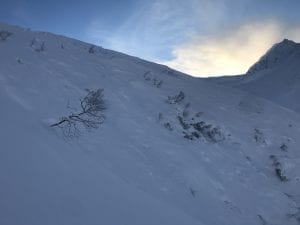 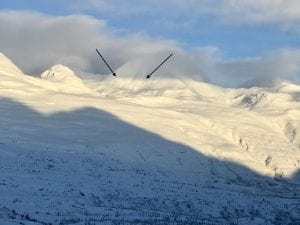 Three Pigs: Nearly every path on the SE face ran with debris deposits stopping  in the top 1/3 of aprons, thick alders prevented slides from running full path.  These were mostly D3 avalanches.

Max High (Peak on the southern extent of Hippie Ridge)  had a D3 avalanche with a crown near 5500′,SW aspect.

The main activity noted, was on the buttresses on the east side of the pass, from Cracked Ice through North Odessey Gully.  Every buttress had significant avalanche activity originating ~4000-5000′.  Many of these failed at the ground, north – northwest aspect.   Pictures below.

School Bus and North Odyssey Gully both ran with debris in the runouts.

Many other large to very large natural avalanches occurred. 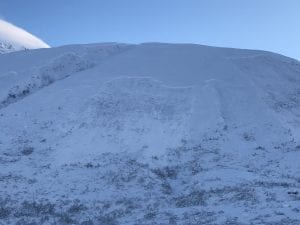 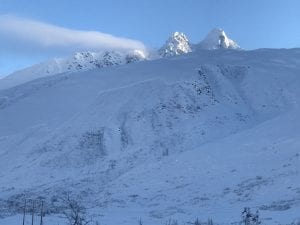 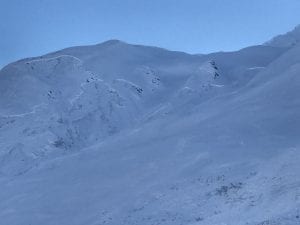 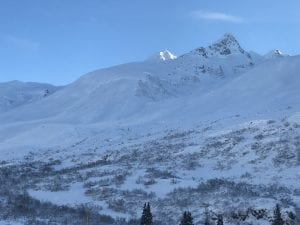 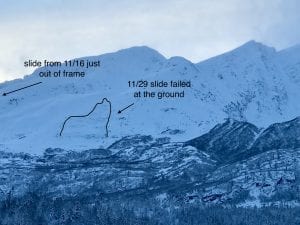 11/15: Natural avalanche observed in Loveland Basin on a South aspect, down the ridge from Tones Temple.  This slide was triggered by recent NE wind loading and failed at the ground. SS-N-R1-D2-G

3/5- Clear skies and light winds with the potential for clouds to filter in from the west. 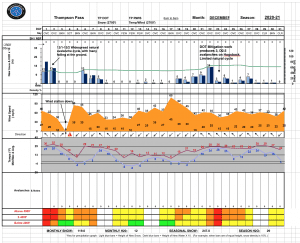 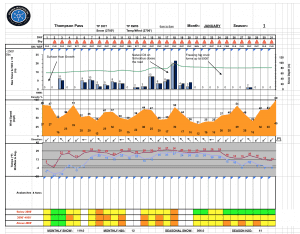 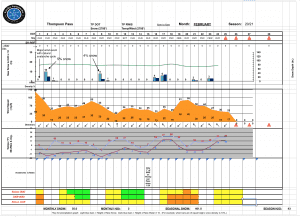 Our season began with a cold, dry and windy November which promoted faceting in the thin snowpack that existed.  Only 28 inches of snow were recorded at Thompson Pass from 11/1 through 11/24.

November 25 began a series of storms that deposited 90” of snow and 11.1” of SWE on Thompson Pass at road level in an 8 day period.  At the tail end of these storms the pass received 25” of snow and 3.7” of SWE in 48 hours, along with rising temps that pushed freezing line up to 3000’.  This sparked a widespread natural avalanche cycle that failed on faceted snow created in early November. Many of these slides failed at the ground.  See avalanche activity section for pictures of the cycle.

December continued with fairly regular snow fall and a couple periods of stable (dry) weather, with snowfall totaling 120 inches on Thompson Pass.    Another, smaller natural avalanche cycle occurred on the 12/22 after Thompson Pass received 44 inches of snow with 4” of SWE in a 4 day period.  Two full-depth naturals occurred in the Continental region on NW-N aspects between 4500-5000’ on NW Crudbusters and Billy Mitchell.  Various other soft slab D2’s occurred in other regions as well. This indicated that depth hoar is still a concern in the Continental region but is becoming less so in our Maritime and Intermountain regions.  Incremental snowfall during the second half of December has allowed the snowpack to slowly gain depth and strength.

Cold, stable weather at the end of December created widespread areas of surface hoar up to 1 cm in height, observed on all aspects between 2000-4000’ and up to ridge lines in isolated locations.  This layer was more concentrated on the north side of Thompson Pass, promoted by colder temperatures and an ice fog layer that was forming during this time frame.  However, this surface hoar has been reported in the Port of Valdez up to brush line.

A significant change in weather arrived on 1/18 delivering as much as 5″ of water to low lying areas with over 2 feet of snow accumulating above 2000′ accompanied by strong southeast winds.  This prompted a natural avalanche cycle with the mid elevation band seeing the most activity.

Outflow winds have begun to affect our area beginning 1/26.  This event was not widespread with many areas remaining protected.  A major outflow event with speeds up to 80 mph on 2/1 had a more widespread affect on our area than the 1/26 event.  Windward slopes were scoured and hard wind slabs were built on lee aspects.  Once the dust settled surface snow ranged from exposed ridges blown to ground, sastrugi and very hard wind slabs.  Numerous small to moderate natural avalanches occurred during the event.

On 2/2 Thompson pass received a foot of 5% density snow (very low density).  This new snow rests on a very hard bed surface and has been slow to bond.  Numerous point releases and sluffs have been observed in terrain steeper than 35°.

On 2/9 our area received an additional 10-16 inches of 4 % density snow, this has added to the depth of snow that is resting upon a hard bed surface.

In areas that were protected from the 2/1 hurricane force winds a freezing fog crust exists 40 cms down, up to 5000′.  Small facets are forming above and below this crust and may become a concern in the future…

Our drought ended on 2/16 with the coast receiving 18 inches of new snow and Thompson Pass 6-10 inches.  Outflow winds rapidly returned with new snow being stripped from windward slopes and deposited onto lee aspects on Thompson Pass.  In exposed terrain below 2500′ winds have stripped surfaces down to the 1/19 rain crust on windward aspects.

Cold/Dry weather over the last month has created small facets beneath old wind slabs and the 1/19 rain crust.  Up to this point there has been an insufficient amount of stress on these layers to produce avalanches.  A storm cycle beginning on 2/26 will be adding stress to these layers and may cause these layers to become reactive.

Photos of Surface Hoar taken 1/1 on Crudbusters at 3500′ north aspect. 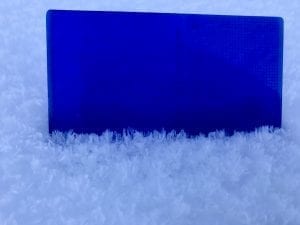 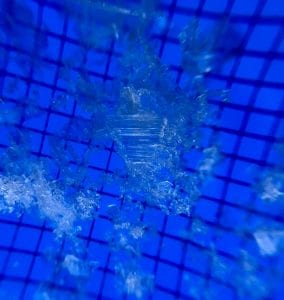 The avalanche hazard is moderate at all elevations in the Maritime and Intermountain zones, and is Considerable in the Continental zone.  Human triggered wind slab avalanches up to 1 foot deep remain possible.  The possibility of finding reactive wind slabs increases as you move away from the coast.  In the Continental zone persistent slab avalanches are possible up to 3 feet in depth that can carry larger consequences.  Read the full forecast for more details.

For more information click the (+full forecast) button below.

Help to improve your community avalanche forecast!  Visit our observation page to leave a comment or you can email me at [email protected]