There has been a lot of natural activity with this outflow event.  Many crown have been quickly blown back in while others are being scoured and re-exposed from the 12/30 natural cycle.

Sometime around 1/10- There have been several natural windslabs that have released in the Thompson Pass region:

Our area has received 6-8 inches of snow with the latest storm.  This new snow is sitting on a variety of wind affected surfaces, ranging from snow that is stripped down to rain crust, to pencil hard wind slab that ranges from 1-3 feet deep and deeper in spots.  The new snow will initially have a difficult time bonding to these hard wind surfaces.  On 1/20 observed long shooting cracks in the new snow and the new snow releasing from slopes that were previously wind board, and steeper than 30°.

We also have a problem layer below 4000′ that is now buried deep within the snowpack.  This poses multiple problems that may make decision making difficult.  Since this layer is buried deeply, it may not show the normal signs of instability- shooting cracks, collapsing.  Also, it may allow multiple people to ski or snowmachine on a slope before someone finally finds the sweet spot and triggers an avalanche.  This type of avalanche will be most likely triggered from areas where the slab is thinner and the weak layer is closer to the surface, near rock outcroppings, or other thin areas of the snowpack. With the snow surface changing to hard wind board, this layer will become less likely to affect.  This problem is more significant the further north you go from Thompson Pass. 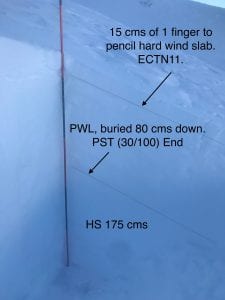 If you have traveled in the mountains, please leave a public observation.  The more info we can get from various locations will help us to get a clearer picture of the snowpack in our beautiful Valdez Chugach!

The avalanche hazard is considerable at mid and upper elevations.  Human triggered avalanches are likely on slopes steeper than 30°.  New snow has showed signs that it has not bonded well to the old wind slab.  Avoid unsupported terrain, areas that are experiencing active wind loading and terrain traps.