2/20: Two side by side avalanches were observed on the NW shoulder of the Python buttress ~3500′. Crown 2-300′ across and ~3’+ deep, low light made it difficult to tell how far they had run.  These slides may have been triggered by DOT mitigation work 2/19, but this is unconfirmed. 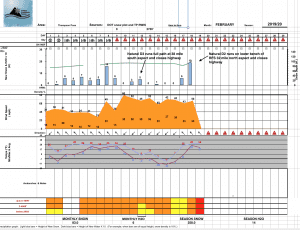 Our area has received up to 4′ of snow with strong south east- south west winds, and warm temperatures since 2/17.  Two paths on Three pigs with a south east aspect at 42 mile ran to the middle of their aprons and the lower north aspect slopes of RFS buried the highway under 10 feet of snow for ~150′ at 33 mile.   It is very likely that many other natural avalanches occurred on 2/19 and 2/20.  Crowns have been refilling and may make seeing previous naturals difficult once skies clear.

The avalanche hazard is Considerable at all elevations.  Thompson pass has received 48 inches of snow, 5.6 inches of SWE and strong SE-SW winds from storms beginning on the 17th.  Strong outflow winds will begin on Thompson Pass 2/23 and are forecasted to reach speeds up to 50 mph.  This wind will decrease surface stability and further stress deep instabilities in our snowpack.  Natural avalanches happened on 2/22 with one burying the highway.  If natural avalanches are happening without significant weather.  You can be sure that it is possible for a human to trigger one on a snowmachine or skis.  The avalanche hazard is Considerable at all elevations.  Sunshine and deep powder will make for a lot of temptation in the mountains today.  Use caution, be conservative and Live to ride another day!!