1/13-1/16: Bitter cold will continue through the week, becoming colder as we move towards the weekend.  North winds will return to strong beginning 1/14 with occasional lulls and peaks through the week.

The surface snow consists of a variety of wind affected surfaces, ranging from snow that is stripped down to rain crust, to pencil hard wind slab that ranges from 1-3 feet deep and deeper in spots.  Wind slabs are gaining strength as snow that is available for transport is becoming exhausted, and wind speeds diminish.  Current wind slabs are stubborn to triggers , but are not dead yet.  Large collapses and shooting cracks are a good indicator that the snow you are traveling on still has the energy to produce avalanches.  Avalanches will likely be initiated from the thin areas of a slab.  Avoid large wind loaded slopes. 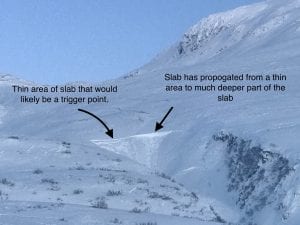 We have a problem layer below 4000′ that is now buried deep within the snowpack.  This poses multiple problems that may make decision making difficult.  Since this layer is buried deeply, it may not show the normal signs of instability- shooting cracks, collapsing.  Also, it may allow multiple people to ski or snowmachine on a slope before someone finally finds the sweet spot and triggers an avalanche.  This type of avalanche will be most likely triggered from areas where the slab is thinner and the weak layer is closer to the surface, near rock outcroppings, or other thin areas of the snowpack. With the snow surface changing to hard wind board, this layer will become less likely to affect.  This problem is more significant the further north you go from Thompson Pass.

If you have traveled in the mountains, please leave a public observation.  The more info we can get from various locations will help us to get a clearer picture of the snowpack in our beautiful Valdez Chugach!

The avalanche hazard is Moderate at mid and upper elevations.  Human triggered avalanches are possible on recently wind loaded slopes.  Triggering a wind slab avalanche has the potential to step down into deeper layers of the snowpack and create large avalanches.  Only expose one person to a slope at a time, and avoid steep rocky terrain, slopes that are being actively wind loaded and terrain traps.