This information is a Conditions Update. Danger ratings are only issued with avalanches advisories.  The next avalanche advisory is scheduled for Saturday January 19, 2019.

While the likelihood of triggering a slab avalanche is decreasing slowly with time, there is still a possibility of triggering an avalanche large enough to bury, injure, or kill a person. Evaluate snow and terrain carefully, identifying features of concern.

Hatcher Pass has had mild temperatures, clear skies, and for the most part, light to moderate winds this week.  The unfortunate exception to this was a strong SE wind event on last Saturday night and Sunday that left the landscape significantly wind affected.

This report is a mid-week conditions update, so please be sure to check hpavalanche.org for advisories on Saturdays and follow the HPAC Facebook for updates. Help us keep tabs on the Hatcher Pass area! If you see any avalanche activity send us an observation HERE. Thank you to everyone who has already submitted observations this season - you can see those HERE!

The snowpack depth is highly variable, from 1-5 feet deep, with the deepest snowpack at upper elevations, on West to North aspects, due to wind loading through the season. Triggering an avalanche on these leeward aspects will be more consequential than windward, shallower aspects due to the amount of snow involved. Windward aspects are scoured down to rock and tundra in many location above 3000'.

On leeward aspects along ridgelines and cross loaded features, a hard 2-10" thick slab has been deposited by last weekend's winds.  This slab can be found sitting on loose, faceted snow.  Observers on Tuesday reported whumphing on a set-up like this in Upper Willow Creek. On Wednesday, these slabs were found to be stubborn to unreactive on North aspects between 4000-4500'.

One of the biggest things we can do to increase our margin of safety is to choose slopes with gentle fanning run-outs and avoid terrain traps. Unsupported slopes in steep, shallow, rocky terrain will be more likely to harbor the avalanche problem.

Keep in mind that the poor structure of our snowpack won't be going away anytime soon, and any new rapid load may re-activate weak layers in our snowpack.

Snow pit in Upper Willow Creek on Skyscraper's west aspect showing our widespread poor structure: a dense slab sitting on two distinct layers of weak, faceted snow at the base of the snowpack. 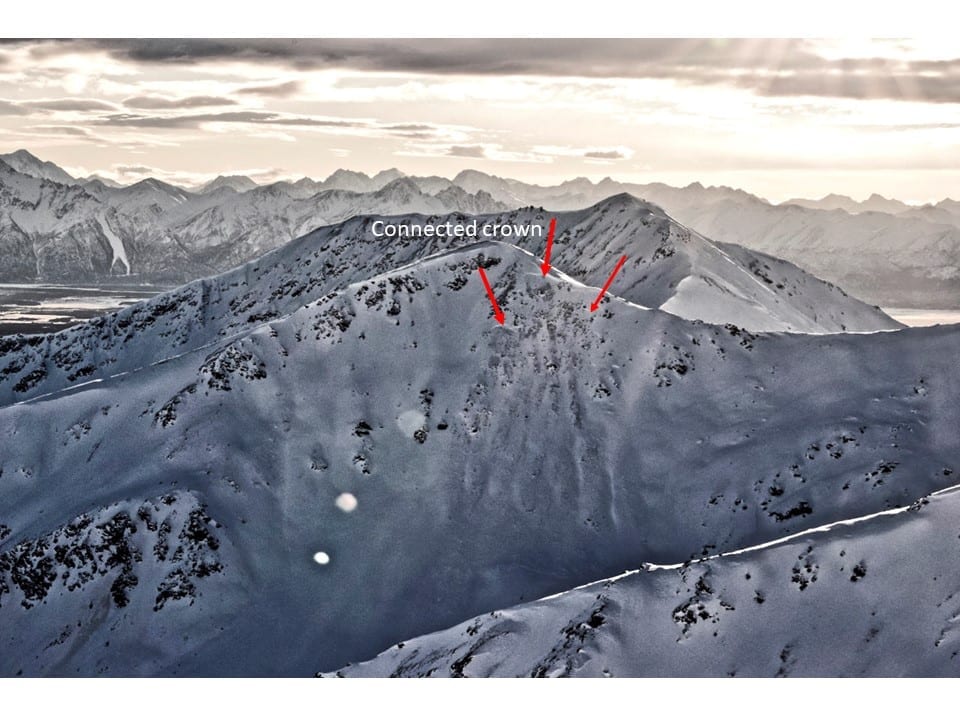 Hard 2-10" thick wind slabs have formed over loose, faceted snow in places.  Whumphing was reported by observers in a spot where this structure was found.

There has been no new precipitation.

Stay tuned to the NOAA point forecast for an updated weather forecast each day. The best way to see if it's snowing in Hatcher Pass is to look at the webcam snow stake HERE and the Independence Mine SNOTEL site HERE

This information is a Conditions Update. Danger ratings are only issued with avalanches advisories.  The next avalanche advisory is scheduled for Saturday January 19, 2019. s

While the likelihood of triggering a slab avalanche is decreasing slowly with time, there is still a possibility of triggering an avalanche large enough to bury, injure, or kill a person. Avoid terrain traps as they amplify the consequences if a slope slides.

Click on the "FULL FORECAST"button for all the details, below.

Buy tickets for the event here. We will have the award-winning band Tanana Rafters.

Unable to make it to our fundraiser?  Consider donating to keep avalanche information like this coming from HPAC!

Want to donate a silent auction item or help with the fundraiser? Contact us at [email protected]