Clouds have limited the ability to see natural avalanche activity during the latest storm. 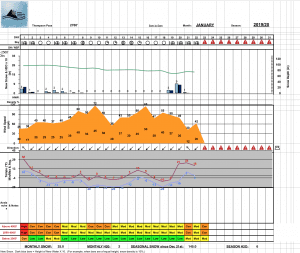 Our area has received 2 feet of new snow from storms beginning the 26th.  This new snow has been redistributed by strong NE wind onto lee aspects (SE-NW) in areas exposed to wind.  Beneath this new snow exists developed near surface facets up to 3mm.  This layer of near surface facets is a weak layer in our upper snowpack and will have a difficult time adjusting to the weight of the new snow.  This is evident by very large collapses rolling across terrain that have been experienced the last couple of days.

There is a lot of spatial variability beneath the layers mentioned above, mostly consisting of variable wind affected surfaces.  These surfaces have gained a lot of strength and are creating a bridging effect above a faceted mid and lower snowpack.  Poor structure exists in the mid and lower pack and although unlikely, still has the ability to create destructive avalanches.  This set up is low probability, high consequence.

We have likely not seen the last effects from this faceted snow in the mid and lower snowpack.  We may see this layer wake up if we see sufficient load, whether it be a significant snowfall, increase in temperatures, a large wind event with significant snow available for transport, or simply someone finding the sweet spot. 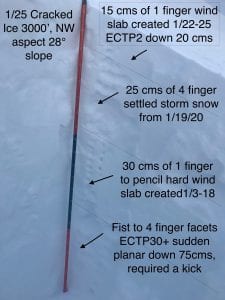 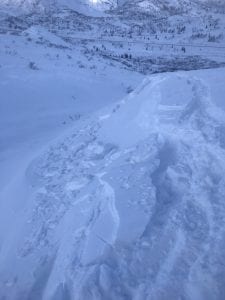 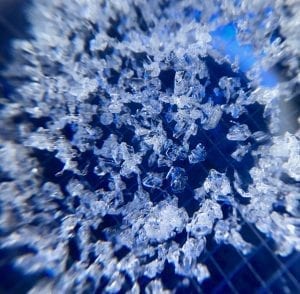 If you see something in the mountains that could contribute to this forecast, leave a public observation.  The more observations we receive, the better we can tune our forecast.

The avalanche hazard is Considerable at mid and upper elevations.    We have received 2 feet of new snow this week beginning 1/26.  This new snow is sitting on a fragile snowpack, which will take longer to adjust to its new load than the typical 24 hour rule.  Human triggered avalanches are likely today in terrain steeper than 30°.  Avoid travel in large avalanche paths and above terrain traps.