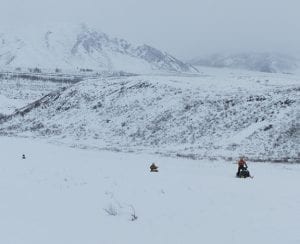 Riders on a gray day Photo by D. McGhan

The skies were gray and overcast when Lawrence Agosti and friends arrived at the Primrose parking lot on the Kenai Peninsula one early February morning to ride their snowmachines. Lawrence grew up riding these mountains and knows them intimately. “I feel like I know every inch of this area from all different directions.”

He also thought of himself as a strong rider that is generally well prepared. “This day turned out to be pretty humbling,” he said.

As the crew set out they quickly discovered the snow was deep and heavy from the warming spring temperatures. “We had a great day riding but it was definitely a stuck fest. We were easily digging six foot trenches.”

That effort left them sweating and exhausted.

At one point one of the friends, Mark Wishall, decided to take off alone to check out other valleys around the area for better conditions.

“We tried to tell Mark to stick around and stay in radio contact but he went over a ridge and down into another valley where he got stuck and couldn’t get back. And he lost radio contact.”

It was closing in on 6:30pm, when the light began to fade and the group decided to call it a day and head for the parking lot. Still unable to reach their friend Wishall, Agosti and another friend, Ben Matlock, decided to ride up on a ridge to see if they could see Wishall and reach him by radio. The rest of the group returned to the parking lot.

“By this point the weather was really changing. The light went flat, fog rolled in and then it started snowing,” described Agosti. “Huge egg sized flakes.”

The heavy snow further soaked through their already wet gear as they rode around searching for their friend.

“It was a good 45 minutes to an hour before we finally raised Mark on the radio and realized he was stuck and couldn’t make it back up the hill. But he could see an island at Lost Lake that we could also see so we agreed to head for that point and meet up.”

By the time they all arrived it was getting dark fast and snowing heavily. They were so grateful to be reunited that all they wanted to focus on was getting out of there alive.

“Ben and I looked at each other and we both knew, we were gonna have to spend the night out there.”

They located a small thicket of trees and dug out a snow cave just big enough for the three soaking wet men to crawl inside and wait out the night.

That’s where the story should have ended; Three guys snuggling in a snowcave… No. This is the point where it got tough. Really tough.

“We were literally packed into that cave cheek to cheek,” Agosti said. “There was hardly room to wiggle your little finger.”

They had just one space blanket and no dry clothes between the three of them.

They tried to relax but their bodies, wrapped in wet clothes and overheated from working, began to cool rapidly. “I was absolutely miserable,” said Agosti. I started shivering and just couldn’t stop.” They checked the time and realized, it had only been 30 to 45 minutes. “I realized, this was going to be one hell of a long night. After another 30 minutes or so I’m thinking, I’m never going to make it.”

That’s when his leg muscle cramped up and began to spasm.

“I needed desperately to stretch my leg but I couldn’t move. And finally I couldn’t lay still and just knew, I had to get out of there.”

Matlock agreed and the two men popped out of that cave like a two headed jack in the box.

Realizing they needed a source of heat, they tried to build a fire but the lighter Agosti carried in his pack was soaking wet.

A glimmer of hope filled them when Matlock remembered he had a lighter stashed in his sled… but that one turned out to be wet too.

“That was the most demoralizing moment of my life. I couldn’t believe how totally unprepared we really were for this ordeal,” said Agosti.

While Wishall stayed in the cave, Matlock and Agosti started the sled they had brought down the hill near the cave and took turns lying on the tunnel to try and get warm.

That proved to be another huge challenge. With their energy sapped from a day of digging their sleds out, it was only youthful strength and shear will that gave Matlock the strength to climb up the hill and retrieve the second sled. For the rest of the night they were able to switch off between the two sleds giving them more time near a heat source.

“That was the most horrible night of my life. The hours just crawled by and we got buried by another eight inches of new snow.”

Finally, as the first glimmer of light began to brighten the sky, the guys agreed, they needed to get out of there. “It was so hard to move. My body was just pushed to the limit. It made packing up our gear take way longer than normal.”

Suddenly a familiar voice broke on the radio giving them new hope and a burst of adrenalin.

“It was my uncle. I couldn’t believe the relief I felt.”

They also knew they still had a daunting task ahead of them.

“We had to ride out of this valley and we all just knew climbing the hill was going to be tough.”

Fortunately, that actually proved much easier than expected and they were soon reunited with family and friends.

“It felt like the best day of my life when we got to the trail and our family and friends were there waiting for us with hot chocolate, cider and dry clothes.”

Again, the story should have ended here but the group still had to ride several miles out to the parking lot and people kept getting stuck and having to be dug out along the way.

“Honestly, I don’t know how I did it. By the time we finally made it to the parking lot, we were all wiped out.”

In reflection Agosti realized they survived because they are a strong team. “We kept encouraging each other and we kept a positive attitude. When I was ready to give up, Ben kept me going. Mark knew some arctic survival skills and we were able to improvise with the things we did have to stay alive.”

Agosti said he understands the decisions we make when out riding with others will affect everyone in the group. And having a positive attitude is critical.

“We got through this because we helped each other and we stayed focused on surviving. I think we all just knew that this was not the time to be critical. I just hope we all learned from this so we never have to spend another night out like this again.

“I know for sure I’m packing more survival gear from now on. I’ll be prepared with the simplest things like a flint and steel, hot packs and a survival blanket for each person.”

Thanks to Lawrence, Mark and Ben for allowing the AAIC to share their story so that others may learn from this experience.